A recent test of a microturbine fueled entirely by vegetable oil was successful, according to IBT Group, Capstone Turbine Corporation’s exclusive distributor in Italy.

A Capstone C30 MicroTurbine® was used in a project testing the ability of a gas turbine to produce electricity and heat in a CHP application using pure vegetable oil – such as sunflower or colza oils – as fuel. IBT Group partnered with Spike Renewables, a research engineering company in Florence for the test.

According to IBT Group, at full power, the 30kW microturbine consumes vegetable oil at a rate of 11 liters/hour with an electrical efficiency exceeding 25%. The innovative IBT-Spike project was supported by the region of Tuscany (Project OVEST) and follows a previous European Community project called LIFE-VOICE.

“Agri-energy markets and raw material producers are harvesting interest in vegetable oil as an alternative to fossil fuels because of its environmental and economic worth,” said Jim Crouse, Capstone’s Executive Vice President of Sales and Marketing. “Microturbines continue to play an integral role in research projects testing the reliability of power sources that use vegetable oil as a renewable fuel.”

“CHP plants powered by vegetable oil are eligible for many incentives including the Green Certificates,” Vigani said. “This technology is particularly suitable for greenhouses, farms and agritourism since there are numerous economic benefits for the agricultural sector. The microturbine produces sufficient onsite electricity and heat to operate a small or medium facility, which helps cut costs and allows companies to explore new avenues of income.” 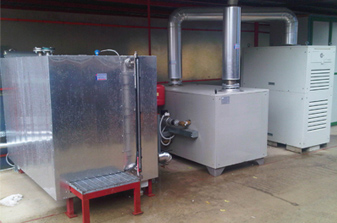 “EPS has the unique ability to recognize the complex requirements of applying CHP and other distributed generation systems to the market,” said Jim Crouse, Capstone Executive Vice President of Sales and Marketing. “With a determined commitment to CHP and other gas-engine applications, EPS customers receive system solutions that achieve maximum availability and the best possible system performance.”

"We’re excited to represent Capstone in the Canadian market,” said Jan Buijk, EPS Ltd. President and CEO. “Because Canada has low natural gas prices and increasing electricity costs, we’ve seen a growing demand for on-site CHP. The potential for distributed generation systems in Canada is significant. The ever-increasing demand for lower emissions, combined with the ease of grid connection and impressive reliability make Capstone microturbines a fantastic addition to our product portfolio.”

On October 28, Capstone was pleased to be a stop on the Green Jobs Bus Tour, a drive from northern to southern California highlighting the importance of green jobs. The Green Jobs Bus will spend 100 hours on the road before the election learning about California's green workers and the growing green economy. Capstone EVP of Sales and Marketing, Jim Crouse, gave both a tour of headquarters and an interview to the Green Jobs crew, providing a firsthand look of a company dedicated to greening the energy sector.

"The LincVolt could be rated as a partial zero emissions vehicle (PZEV), and using biodiesel would emit less CO2 than even an all-electric car powered by the California grid," said Jim Crouse, Capstone's Vice President of Sales and Marketing.

In support of his LincVolt Repowering the American Dream initiative, the singer/songwriter is journeying across the nation to raise awareness about reducing vehicle impacts on the environment and the demand for petro-fuel. 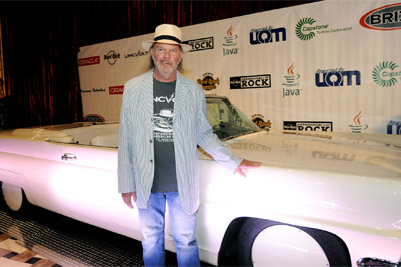 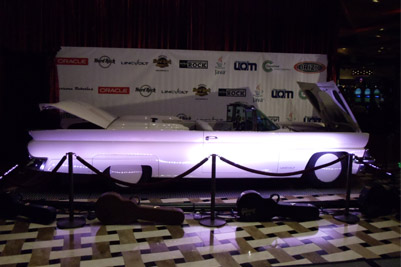 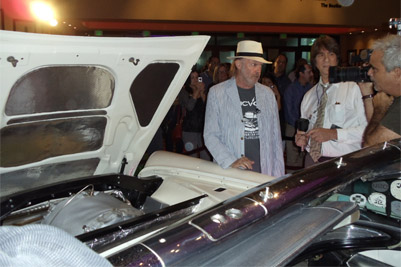 Young being interviewed next to LincVolt showing Capstone's C30 microturbine under the hood.

Capstone distributor IBT Group sold and commissioned the C1000 at Recla, a large well-regarded Alto Adige Region company in the Italian Alps that produces ham, sausages, bacon, salami, prosciutto, and other high-end meat products that are exported around the world.

The natural gas C1000 was installed in Recla's production facility in a combined heat and power (CHP) application. The C1000 provides one megawatt of electricity to supplement power from the local utility. In addition, the turbine recovers waste heat that is used to preheat water for steam used in the manufacturing process and to produce additional hot water for the facility.

For each C1000 turbine installed, emissions reductions will be equivalent to removing 700 cars from the road or planting 730 acres of forest.

Prior to the installation of the C1000, Recla used a small stand-by generator that could not relieve the facility from regular, detrimental blackouts that completely stopped factory production.

“Once the C1000 was installed, Recla no longer suffered from blackouts and power failures,” said llario Vigani, IBT Group CEO & President. “In addition to the reliability benefits of the C1000, Recla also is significantly reducing energy consumption by more than 80 percent and saving approximately €250,000 (US$331,000) per year on energy costs.Because of this, Recla is considering ordering a second Capstone C1000.”

"We’re proud to have found in Capstone products the same ethical values that both Recla and the Alto Adige Region have always believed in: high quality, environmental respect, complete reliability and commitment to customers," said Franz Recla, who owns the company with his brother, Gino.

“The C1000 is ideal for Recla because it produces reliable electricity onsite while increasing energy efficiency with little maintenance,” said Jim Crouse, Capstone Executive Vice President of Sales and Marketing. “Recla has a great product and now they are producing it in the best way possible. We are sincerely honored to be a part of Recla’s sustainability efforts.” 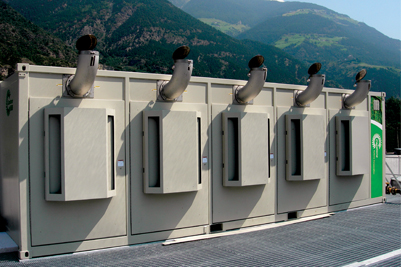 On August 17, 2010, Capstone was honored to host U.S. Senator Barbara Boxer during her visit to Capstone's corporate headquarters. While speaking to Capstone employees and reporters, Senator Boxer described how Capstone microturbines, which are manufactured in California, help to preserve our environment, create jobs in California, and secure the United States at the forefront of technology innovation. Senator Boxer took a tour of the factory, met with employees, and learned about the future of microturbines in America's quest for energy independence and low emission sources of generation. 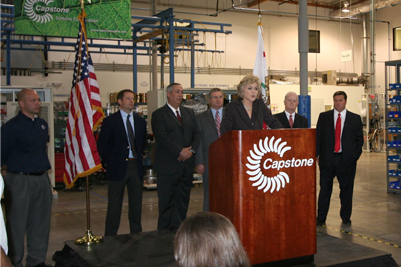 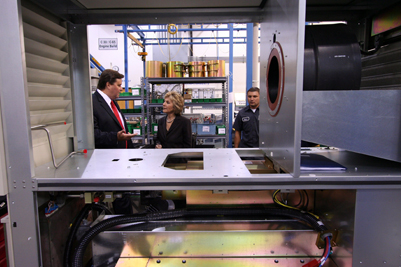 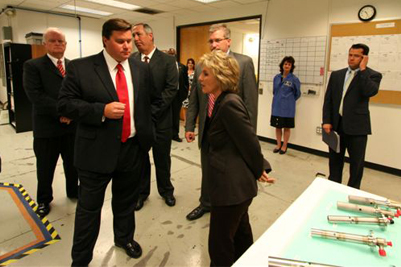 The system is installed in Bogota, Colombia, at a new, high-profile 10-story building. This building, along with the two natural-gas Capstone C800 Power Packages, is part of a 12-building plaza in bustling downtown Bogota that is leading the way for revitalization of the district. The building houses the Colombian Chamber of Infrastructure (CCI), a powerful nationwide organization that plays a critical role in defending the interests of Colombian infrastructure construction companies and promoting business growth. The project was originally slated for a fuel cell supplemented by utility power, but the Capstone distributor in Colombia convinced the owner to switch to ultra-low emission Capstone microturbines, which were installed in January 2010 after the building was already under construction. 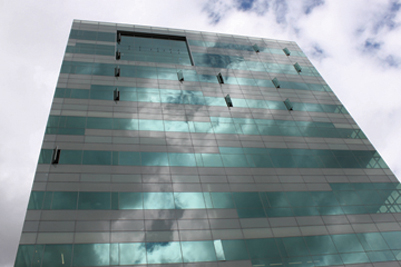 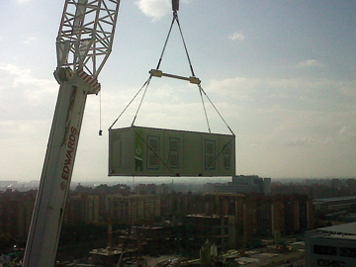 “Since 2004, IBT has been one of Capstone’s leading distributors in Europe,” said Jim Crouse, Capstone’s Executive Vice President of Sales and Marketing. “The company’s work with CEM is the latest in a long line of innovative IBT projects, and the first involving a landfill in Italy. IBT continue to be one of Capstone’s most forward-thinking and ambitious distributors.”

The landfill, which closed in the early 1990s, will use the ultra low-emission microturbines in a combined heat and power (CHP) application. In addition to producing 325 kilowatts of electricity (7,800 kilowatt-hours per day) for landfill buildings, excess heat energy produced from the microturbines will provide heat for the buildings and an onsite greenhouse, and for landfill leaching treatment.

The Capstone microturbines will run on waste-methane gas produced at the landfill. Today, many landfills, wastewater treatment plants, and agricultural operations flare waste methane gas into the atmosphere, which increases greenhouse gas emissions and global warming. Capstone microturbines are an ideal solution because they use the biogas to produce reliable, clean renewable energy onsite.

“The microturbines replace a noisy, pollution-generating reciprocating engine that was installed in 1999,” said llario Vigani, CEO & President, IBT Group. “CEM is an environmentally focused company. The microturbines are estimated to reduce carbon dioxide emissions by 3,900 tons each year, and can operate on the smaller concentrations of methane in the closed landfill.”

In addition, Vigani noted that Capstone microturbines are extremely low maintenance since they have only one moving part and do not need any oil, other lubricants, coolants. or hazardous materials to operate.

“This first-ever installation of Capstone microturbines in an Italian landfill will serve as a model for Italy,” Vigani said. “At the site, IBT will showcase innovative ways the landfill uses waste biogas in an environmentally conscientious way to produce electricity and thermal energy. The overall efficiency of the CHP system is expected to exceed 80%. ”

Since 2004, IBT has played a key role in several prominent Capstone Turbine Corporation projects in Italy, and the company expects to grow 30 percent in 2010.  One high-profile project involved the large wastewater treatment plant in Cossato, Italy. For the project, IBT sold and oversaw installation of a CR200 Capstone turbine that produces 1.7 million kW-hours (kWh) yearly to supply the plant’s electrical power needs. Fuel for the CR200 comes from the 2,600 cubic meters of biogas that earlier had been burned away as waste. An external heat exchanger installed with the turbine delivers another 2.3 million kWh of thermal energy to warm the digesters. Together, the combined heat and power produced will cut carbon dioxide emissions at the plant by 1.8 tons per year.

The system will be installed at ANTEX (Angles Textil S.A.) located in Spain.  ANTEX is an independent Spanish Textile group whose activity centers on the broad world of synthetic yarns. It has eight industrial plants in Spain and one in Brazil. This project was developed by DISTEC, a company based in Girona, Spain, under the umbrella of "Micropower Europe". Micropower Europe is a network created by Verdesis Suisse SA, with headquarters in Switzerland of various European companies specializing in the development, marketing, application, sales, and servicing expertise in the power generation industry using Capstone MicroTurbine®. 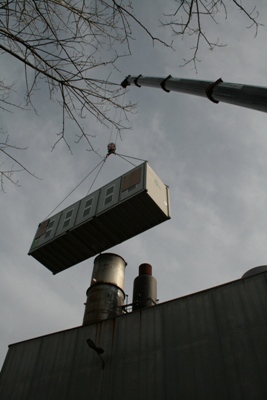 The First C1000 Capstone System Being Lowered on Site 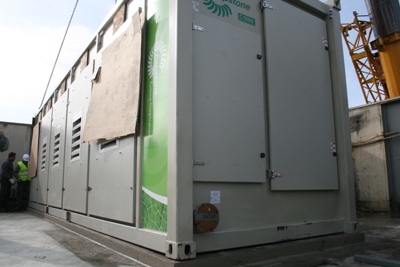 Chicago Tribune: By Jon Hilkevitch/Tribune Reporter, 11:53 AM CDT, June 17, 2008: The CTA on Tuesday began testing a lighter-weight hybrid electric-powered bus that may achieve double the fuel efficiency of current hybrid buses, officials said. The key behind the technology is a jetlike turbine that delivers electricity to a battery pack that solely powers the bus. The bus being tested by the CTA is made by DesignLine International LLC in Charlotte, N.C.